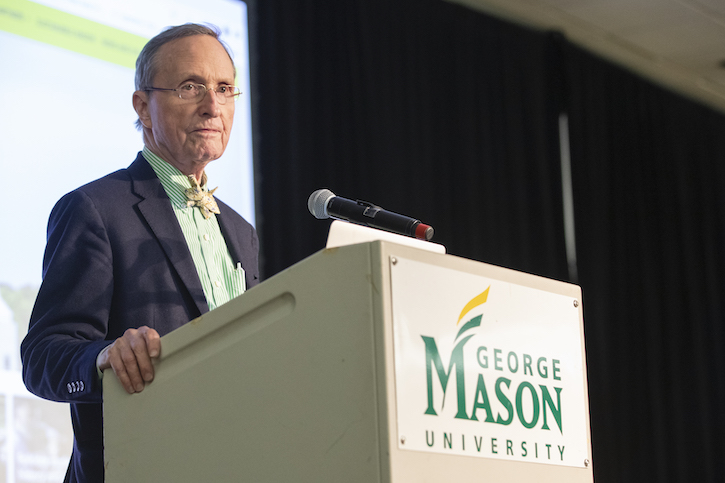 University Professor Thomas Lovejoy speaks at the launch of the Institute for a Sustainable Earth. Lovejoy serves as the institute's scientific director. Photo by Lathan Goumas/Strategic Communications

The critical tipping point for the Amazon rainforest has arrived, and an ecological disaster could be in the making if drastic actions aren’t taken immediately.

Those are the findings by noted George Mason University conservation biologist Thomas Lovejoy and Brazilian climatologist Carlos Nobre, presented in an editorial co-authored in the latest Science Advances journal that was released on Dec. 20. The two noted scientists made international headlines early last year when they first warned of the coming critical juncture.

“We are no longer in a situation where the tipping point is on the horizon,” Lovejoy, a 2019 Virginia Outstanding Scientist, said in an interview. “It is here and now. If allowed to tip, it will affect continental climate and produce dieback in the south and east part of the central Amazon. That would represent an unconscionable release of carbon, loss of biodiversity and impact on the local people.”

In addition to being a great source of biological diversity, the Amazon rainforest plays a key role in the fight against global climate change by helping absorb carbon dioxide from the Earth’s atmosphere, and is pivotal in the hydrological cycle for most of South America, Lovejoy said. The Amazon itself contains a large amount of carbon gas, much of which could be released into the atmosphere to contribute to additional global climate change if the rainforest is allowed to erode.

Lovejoy, a University Professor in Mason’s Department of Environmental Science and Policy who first coined the term “biodiversity,” and Nobre called the current levels of deforestation “significant and frightening.”

“The loss of forest will lead to staggering losses of biodiversity, carbon and, in turn, human well-being,” they wrote.

The Amazon had previously remained healthy, moist and green by generating half its own rainfall by recycling moisture as air masses move east to west, crossing from the basin from the Atlantic, Lovejoy said. That moisture contributes desperately needed winter rainfall for parts of Paraguay, Argentina and even areas of Southern Brazil that occasionally experience severe drought. Every country in South America, other than Chile, benefits from Amazon moisture.

The deforestation, which largely stems from the large-scale clearing of land for agriculture (cattle and soy) and illegal gold mining, disrupts the hydrological cycle as the soils dry up, resulting in less water returning to the atmosphere and significantly less rainfall.

Scientists had initially believed the Amazon’s ability to sustain the rain forests could withstand as much as 40% deforestation, but now believe that number to be much lower at 20 to 25%.

“It is no longer just a scientific hypothesis out of future projections arising from climate models,” said Nobre, who is South America’s leading climate scientist.

Lovejoy, who also serves as a science envoy for the U.S. State Department and is the scientific director for Mason’s Institute for a Sustainable Earth, teamed with Nobre in February 2018 to warn the world of the pending disaster, citing recent severe droughts and extreme floods as evidence that the entire Amazon rain forest system was teetering on the brink of disaster as a result of years of uncontrolled development and deforestation. The portions of the forest closest to the tipping point are in the Peruvian, Bolivian and mostly Brazilian Amazon.

The two scientists are calling for “substantial, but not complete reforestation especially in areas that have been abandoned.” All of the countries involved have voluntary plans of reforestation, but financing for the large-scale project has proven difficult.

“Citizens and leaders across South America and around the world must create and promote a new vision of the Amazon,” Lovejoy and Nobre wrote, “one that recognizes the natural and economic assets of the region must be managed to maintain its essential role for South America and in sustaining the health of the planet.”