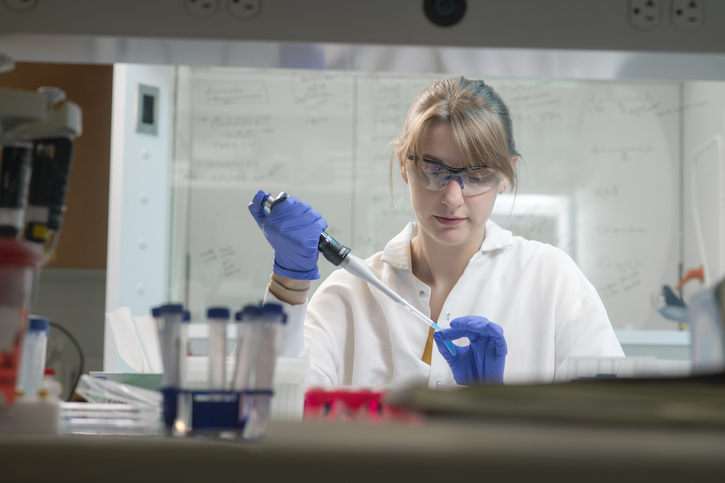 George Mason University researchers have discovered the exact location where two proteins responsible for hiding cancer cells from the immune system bind. This discovery provides a novel approach to developing new cancer immunotherapy medicines that can be administered as a pill, compared to existing intravenous therapeutics. The findings were published in July 2019 in the Journal of Biological Chemistry.

According to Amanda Haymond, lead author on the study and a researcher in the Center for Applied Proteomics and Molecular Medicine and Institute for Biohealth Innovation, the discovery was made possible by an Mason-developed protein-painting technology, funded by the National Cancer Institute’s Innovative Molecular Analysis Technology (IMAT) program.

“The goal of IMAT is to support the creation of novel technologies that enable scientists to make transformative discoveries in cancer research that were not possible before,” said Tony Dickherber, director of the IMAT program.

The protein painting technology, developed under National Institutes of Health funding, is indeed transformative. The process starts with two or more proteins that when bound together, drive disease. The scientists use small molecule dyes to paint the bound proteins, and then a chemical reaction known as denaturation chops them up. The final step is when scientists use a mass spectrometer to identify the unpainted regions, which is where the proteins touch.

These 3D models of a receptor, co-receptor and ligand demonstrate how the protein painting technology works. The regions which aren’t painted when the proteins are bound, designated white, can be detected by mass spectrometry and inform rational drug development. Photo by Evan Cantwell/Creative Services.

Current technologies in early-phase drug discovery, such as crystallography, are often complicated, costly and time-consuming. The protein painting technology specifically identifies protein-protein touchpoints, highlighting an ideal location and recipe to follow for drug development. The recipe, along with the fact that the technology allows for rapid performance testing of the drug, means that results can be produced in several days, rather than years.

To build on this success, the Mason team needed to push more boundaries. In the new article, the team describes how they enhanced their technology, reporting the development and optimization of a novel protein dye that has been successfully tested on clinically relevant protein complexes, PD-1 and PD-L1. In the publication, the team also unveils new findings that chemically decipher the way that dyes interact with proteins, which has been a mystery to scientist for decades.

“The secret to using the protein-painting technique is having the perfect dye molecule with just the right structure to bind tightly onto proteins,” said Haymond, who completed her PhD in biochemistry at Mason in 2017.

Monet Pharmaceuticals, a newly formed pharmaceutical company based in Prince William County, Virginia, has partnered with the Mason team to exclusively license patents owned by the university broadly covering the protein-painting technology.

“We have many talented faculty at Mason who create groundbreaking technologies, but it takes partnerships to maximize impact,” said Lance Liotta, co-director of the Center for Applied Proteomics and Molecular Medicine. “In this case, the impact is accelerating the drug discovery paradigm.”

While the impressive technology has the potential to transform the drug discovery process, it is grounded by humble beginnings.

“It started with a simple idea that we were able to test in the lab,” said Haymond. “This is a prime example of why we should always ignore the impeding thoughts that someone must have thought of this already, or that an experiment would never work. Some of the simplest ideas can lead to the biggest discoveries.”