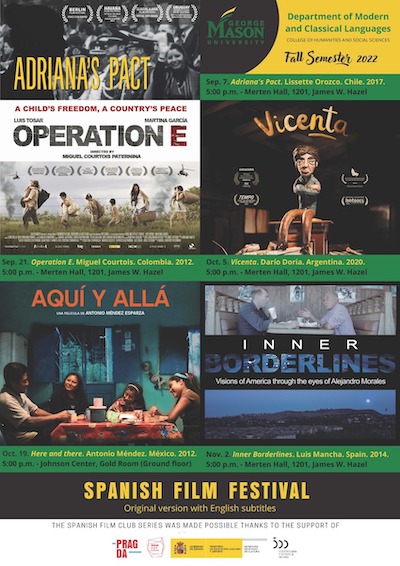 In an effort to expose students to some of the social and political problems of the vast Spanish-speaking world, George Mason University’s Department of Modern and Classical Languages is hosting a Spanish Film Festival that is free and open to the public.

The festival, ongoing through November 2 and coinciding with Spanish Heritage Month, features five films. Javier Avilés, assistant professor and the festival’s organizer, selected the films with the support of some of his colleagues in the department, and specifically the Spanish Program.

“I picked five films to help students better understand some of the challenges, the way of life, and the diversity within the Spanish-speaking world,” said Avilés, who is at Mason as a Spanish lecturer of the Spanish Agency of International Cooperation and Development (MAEC-AECID) under the Spanish Ministry of Foreign Affairs and Cooperation

Avilés said he and the department selected films featuring a range of different places, such as Chile, Colombia, Mexico, and Southern California, to reflect the growing diversity of Spanish-speaking students and professors at Mason.

“What excites me the most about this festival is the representation,” said Fabi Rosales, a freshman computer science major who was born in Puerto Rico and is half Mexican. “Anytime there's a movie that takes place in a Spanish-speaking country, the characters are usually either on vacation or it's a paradise. But we are more than our beaches. We are our own people with our own struggles and stories.”

Rosales said she plans to see all the films, but she’s most interested in two: “Adriana's Pact,” in which the director, Lissette Orozco, tells the story of her aunt who is accused of belonging to the secret police during Augusto Pinochet’s military dictatorship in Chile; and “Here and There,” written and directed by Antonio Méndez Esparza, about the return of a Mexican migrant to his hometown after working in the United States.

Thanks to the support of Pragda, a distributor for the newest Latin American, Spanish, and Latinx cinema, Avilés reviewed more than 100 films that he said would otherwise be difficult to obtain for viewing. It was important, he said, that the chosen films were those students could connect with and would prompt educational conversations.

For example, “Vicenta,” a film concerning the right to abortion in Argentina, was chosen in part because “it is a subject that is also in debate in American society right now,” Avilés said.

The other goal of the festival is to show students a different way of producing films as art.

“It’s very difficult to get access to these kinds of movies from other countries,” Avilés said. “This festival can give students a different perspective on cinema and how stories can be told.”

Noah White, a sophomore majoring in special education and minoring in Spanish, said he’s attending the festival to improve his Spanish language proficiency and be introduced to different cultures, but also to get a glimpse of different film techniques.

This festival was organized once before by Professors Esperanza Roman-Mendoza and Lisa Rabin in 2015. The contributions of Pragda, as well as SPAIN arts & culture, a program that promotes Spanish culture in the United States, have made this second Spanish Film Festival possible, Avilés said.

Some professors in Mason’s Spanish Program are offering their students extra credit for attending, Avilés said.

For more information about the festival, visit here.