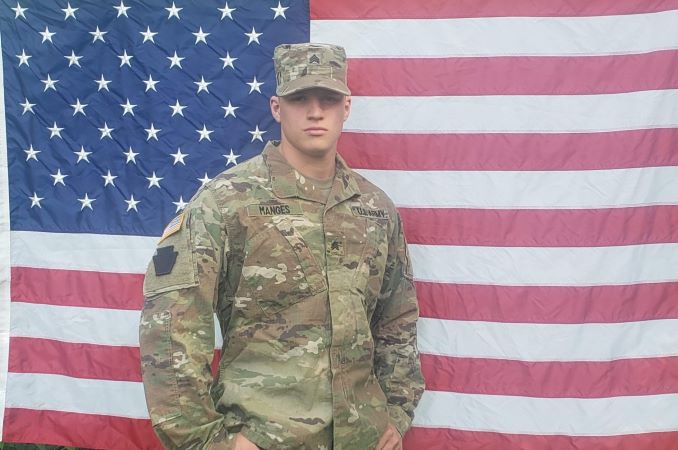 A strong sense of duty is what led Michael Manges to George Mason University, and the Veterans of Foreign Wars’ Sport Clips Help A Hero Scholarship is helping him realize his dream.

A first-year graduate student in the international security program within the Schar School of Policy and Government who also works full time, Manges is one of 158 veterans and active-duty service members awarded a Help A Hero Scholarship this semester. The scholarship is funded through donations collected annually during the Help A Hero campaign at Sport Clips Haircuts locations around the country and has provided 1,750 scholarships totaling $8 million since 2014.

“I didn’t expect to get it when I first applied,” said Manges, who graduated from the University of Pittsburgh-Johnstown last spring with a degree in political science and geography. “It’s just been fantastic. That financial stability has been really crucial for me.”

Manges, 23, grew up in Central City, Pennsylvania, which is just a few minutes from the site where ill-fated United Flight 93 crashed on Sept. 11, 2001, killing all passengers on board after they resisted terrorists who had hijacked their plane. Growing up there instilled strong feelings in Manges about the importance of protecting the nation.

One weekend a month and two weeks out of the summer didn’t seem like much to ask in return for his education, so Manges joined the Pennsylvania Army National Guard after he graduated from high school. He spent a year deployed to Jordan from 2016-17 and has been activated in 2020 along with several other members of his unit to help in COVID-19 relief operations.

But his dream of ultimately serving his country in the intelligence or federal law enforcement fields never wavered. Mason’s international security master’s degree program and proximity to Washington, D.C., made it the right choice for him.

“I wanted to find something that would benefit me or my career path,” Manges said. “The Schar School really stood out when looking at programs.”

In addition to taking three classes while fulfilling his National Guard commitments, he’s also working full-time as an intelligence analyst for the U.S. Army and contractor for the Department of Justice.

Now a sergeant, Manges recently signed up for another six-year stint with the National Guard.

“I think things have been going really well,” he said. “It’s been a pretty good experience, and I’m enjoying it. I’m making the best I can of going to school, working full-time and fulfilling my National Guard commitment.”